In May 2019, the UN General Assembly passed a resolution establishing The International Day Commemorating the Victims of Acts of Violence Based on Religion or Belief to be marked annually on 22 August. The establishment of such a day, however, is not an end goal in itself. This day is intended to provide a springboard towards action that addresses the growing issue of violence based on religion or belief. In recent years, violence based on religion or belief is an ever-growing problem which must be addressed with a number of different and wide-ranging responses.

On 23 August, the Coalition for Genocide Response hosted a webinar marking the day. The webinar was co-chaired by Fiona Bruce MP, Prime Minister’s Special Envoy on Freedom of Religion or Belief and Dr Ewelina U. Ochab, Co-founder of the Coalition for Genocide Response, author of the initiative to establish the UN day. While marking the UN day, the speakers discussed required responses to acts of violence based on religion or belief, focusing on how to help individuals and communities after such violence occurs and how to prevent such acts in the future.

Nadine Maenza, Chair of the US Commission on International Religious Freedom

Adam Phillips, Director of the Center for Faith-Based and Neighborhood Partnerships (FBNP), and of the Local, Faith and Transformative (LFT) Partnerships Hub within the Bureau for Development, Democracy and Innovation (DDI) 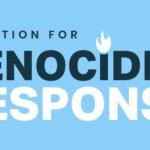 Will The Biden Administration Recognize The Atrocities Against The Rohingyas For What They Are?

Join the Initiative to #BringBackTheYazidis